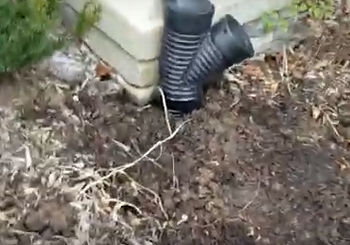 So to please everybody, they make a dual wall pipe. Corrugated on the outside, smooth on the inside. So this pipe cuts down on friction and moves more water.  To connect it, it is fairly flexible, but to make the connection at the house, we’ll use the single wall that I showed you, to do like a sweeper 90 and then tile tape it to the dual wall.

Here’s one that’s finished.  There’s a sweeper 90 here in a single wall. Then we go to our dual wall.  So, that we cut down on friction and we move the maximum amount of water and there’s no way debris, like shingle gravel, can get stuck in the pipe.

If you’re looking for an installer to build an underground drainage system in southeastern Michigan and you want it done right the first time, give us a call at 248-505-3065.

About the Author: French Drain Man

Robert Sherwood is a professionally licensed builder at the design, building and consulting company Sherwood Landscape Construction L.L.C. in Romeo, MI. He is an expert in drainage issues teaching homeowners in water management. He has worked thousands of projects successfully removing water from properties. Over the years these clients have benefited and saved money in the preservation of home and property. Robert Sherwood is currently the project manager at Sherwood Landscape Construction L.L.C. and French Drain Man.